Don’t Bother with a Book Proposal 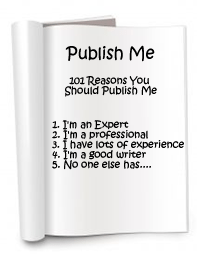 At least that’s what they called it on a planet that no longer exists. I know what happened; she read some advice, hopefully not in a book that cost her money, on how to submit a book proposal to publishers. Advice is great, and there’s plenty of it out there, just be sure it’s valid in the millennium you’re living in. Here was my advice to her (did I mention that I’ve known her all her life?)

I received your chapters in the mail yesterday. Nice work! My best advice is to keep writing and keep growing your craft. Finish the story.

That said, don’t believe advice about sending sample chapters, a bio and return envelopes to publishers. It rarely works like that in the real world, if it ever did. There are thousands of good stories out there that will never see outside a publisher’s waste basket. There are two kinds of publishers – those who want you to pay to publish your book and those who will cover the cost of publishing your book. The first (subsidy publishers) make a business of putting your manuscript into book form (which includes a lot that most authors aren’t aware of) and charging the author for the service and for the books. Their business is selling authors, they make their money from the author contracts and the books the author buys; if others buy the books too, that’s an incidental bonus. Their primary motivation is selling you, rather than selling books.

The second (traditional publishers) pay the publishing costs out of pocket and make their money by selling books, and pay the author a royalty for each book sold. Selling books is their business, so their main (only) interest is how many books they can sell, which means they’re interested in the audience, not the book. You can have a great book, but without a pre-existing audience a traditional publisher wouldn’t touch you because they don’t have an audience for the book. That’s why an ex-president or first lady can write a piece of crap and sell a million books – it’s got nothing to do with the book, only the audience. About six million books were published last year (my estimate based on ISBN’s sold); a good book isn’t guaranteed, or even likely to sell just because it exists. And forget about bookstores – they don’t sell books, they just temporarily house ‘pre-sold’ books until someone in the audience stumbles into the store and buys one. They only stock books that have already been ‘pre-sold’ so a new author’s book doesn’t make it to the bookstore anyway.

Neither kind of publisher (or the bookstore) are bad, they’re just trying to make a living in a tough industry. But there are crooks on both sides though so beware.

I said all that to say this:

Don’t worry about your book being commercial (making money) or even being accepted by a publisher at this point. Just finish it and make it as good as you possibly can.

All the stuff above may seem a little negative but it’s not. It’s wonderful! For the first time in history anyone with a message can have a voice! But you’ve got to earn listeners.