19 Ways to Turn Setbacks Into Comebacks

Not just another tale of tragedy to triumph! Pain, Power & Promise is Nannette Oatley Johnson’s compelling life story. It is a candid and unforgettable journey through trauma, marriage, infidelity, divorce, single parenthood, graduate school, professional sports and miraculous new love. You’ll find yourself cheering as she weathers every setback, reinvents herself and finds the tenacity to smack adversity around and force it to divulge its hidden pearls. And you’ll share her passion to raise the level of compassionate consciousness toward the physically challenged. Bold, warm and sassy, Nannette’s story offers a self-help survival kit with a universal message of strength and hope.

Nannette Oatley Johnson, MA, LPC, is a Wife, Mother, Nana, Author, Speaker, Chaplain, Pastor, Life Coach and the 2001 U.S. Open Wheelchair Tennis Singles and Doubles Champion. Each of these roles signifies a commendable achievement for any individual; together, they form an extraordinary list of credentials for one person to attain. But when the woman who fits the bill is a sit-down person in a stand-up world, the magnitude of her accomplishments is astonishing.

For over thirty-five years, Nannette’s life has been a living testimony to the power of resilience. She was a former gymnast, dance choreographer, and amateur actress until a broken neck altered her life in 1982. Following her injury, she married and gave birth to three children within three years. In 1989, when her children were five, three-and-a-half and two, she began a single-parent career that encompassed nine years. During that time she completed a B.A. in counseling psychology and then an M.A. in counseling and human services.

Nannette first picked up a tennis racquet in 1993, eleven years after her injury. Since then she has accrued twelve championship tennis titles—six singles and six doubles—eight of them international wins, including the 2001 U.S. Open Singles and Doubles Championship title. She has been featured in local, regional and national media.

In 2002, Ms. Oatley Johnson became the first recipient of the “Director’s Recognition Award” presented by Women in Networking, an affiliate of the National Association of Female Executives, for “inspiring women to be all they can be.” In 2016, Nannette was inducted into the Prescott Area Tennis Association’s Park of Fame, and in 2017 was licensed by Sanctuary Covenant Church as a Minister of the Gospel. She is a member of the U.S.T.A., Christians for Biblical Equality, the National Board of Certified Counselors and Prescott’s Sanctuary Covenant Church.

Today, Nannette divides her time with her beloved husband, her weekly Nana/Papa Day where the grandgifts reign supreme, her monthly commitment to Chaplain work at YRMC, and her co-pastoring role and leadership of a weekly Kingdom Outpost. She also inspires others and strengthens their resilience through her Life Coaching, speaking engagements, books, newsletter, and vlog. 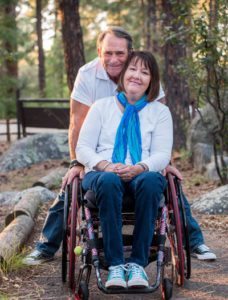 Nannette Oatley Johnson’s book Pain, Power and Promise: 19 Ways to a Bolder, Stronger and More Resilient Life! (2018 edition) is scheduled to be released in January.

Like many of our authors, Nannette is a professional speaker. But she also holds Bachelors and Masters degrees in psychology, is a professional counselor, author and holds 12 championship tennis titles. And, she has also won numerous speaking and business awards. Nannette is the mother of three grown children and wife of a retired Arizona Sherrif’s deputy.

Did I mention that the achievements above came after a snow-tubing accident at age 22 left her paralyzed and a wheelchair user? 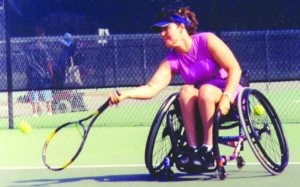 As Nannette says, she’s a sit-down person in a stand-up world. And please, don’t use the “H” word (handicapped); it doesn’t exist in Nannette’s world except as a pejorative. If it was up to her it would be stricken from the English language. 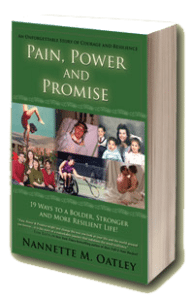 But please, don’t read this book just because Nannette’s life is an inspiration, read the book because it’s good! It’s irreverent … if you’re a prude. It’s refreshing … if you’re looking for unabashed truth. And it’s hilarious … if you’ve ever appreciated the hilarity in everyday life.

Nannette is a treasure. Her book Pain, Power and Promise: 19 Ways to a Bolder, Stronger and More Resilient Life! is a treasure. We are happy and proud to help her share her story with the world.