What I learned from J. W. Marriott about books

I used to travel more than I do now. I’ve spent a lot of nights, more than I wanted to, in hotels. When you spend the night in hotels regularly you develop favorites.

The “frequent stayer” reward programs do their best to garner loyalty to their brand. But I preferred certain hotels in certain cities, regardless of the brand.

On one trip (maybe 20 years ago?) I checked into the Chicago Marriott Downtown Magnificent Mile. Beautiful hotel! 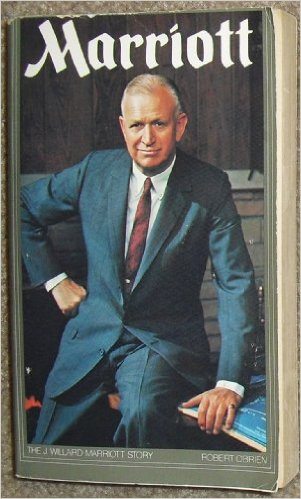 Once I was in the room and had my bags settled, I checked the nightstand drawer (habit? boredom? I don’t know). There was a Gideon Bible, no surprise. Do they still put Gideon Bibles in hotel rooms? I haven’t checked in a while. My travel Bible these days is an iPhone app.

Beside the Bible was a book of Mormon. That was surprising. And beside the Book of Mormon was a paperback – Marriott, The J. Willard Marriott Story by Robert O’Brian.

Marriott and new wife, Alice (“Allie”), headed for Washington D.C. right after their Utah wedding, where they opened the first A&W Root Beer stand in Washington. Then another … and another. The Root Beer stands grew into restaurants, “Hot Shoppes.” Then the Marriotts opened their first, “motor-hotel” … then another. And the rest is history.*

When I checked out of the Chicago Marriott, the book was I my briefcase. I didn’t ask if the paperback was “complimentary” but I wanted to finish the story, and my guess was they had replacements (I did leave the Gideon Bible and the Book of Mormon).

I finished reading the book on my plane flight home. When I unpacked my briefcase I put Marriott on my bookshelf. It stayed there for years until I gave it to someone whom I had told my abbreviated version of the “Marriott story.”

I don’t know how many times I shared my Marriott story with business associates and fellow travelers over the years. I’m sure most of my regular friends have heard it more than once.

Something happened to me when I read that book. I became a fan of the hotel chain. I felt like I “knew” J. Willard and “Allie” Marriott personally. When traveling and given a choice of where to stay, I stayed at a Marriott. And I told Marriott’s story to fellow travelers. I became a Marriott evangelist.

I’m sure the Marriott organization has spent multiplied millions on advertising and marketing to attract hotel guests over the years. I’m not sure how much they spent twenty years ago putting Marriott, The J. Willard Marriott Story in the nightstand drawers of each room, probably a reasonable amount. It was the mass-market paperback edition, not the hardcover so the print cost per copy was probably less than a few bucks. Sounds like J. Willard, he was always a thrifty businessman.

All I know is that little paperback shared Marriott’s life with me. It put a name and a face and a life, behind the brick and mortar of those hotels. And it turned me into a Marriott fan for many years and many stays.

The Marriott lesson wasn’t lost on me. Now, years later, as a publisher, I deal in stories every day. And sometimes the effect of sharing a story goes far beyond just selling a book. Sharing a story is also sharing a life. The life of a person, or an organization. Sharing creates fans. And fans remain fans long after they’ve put down the book, and their sharing creates new fans.

A book can be more than a book. It can generate far more revenue than its cover price. The most successful book we’ve ever published was priced at $7.95, but not many people bought the book. Hundreds of thousands of copies were given as gifts. Giving this little book away helped raise more than $100 million for the organization that lived by the story in the book. This little book helped potential investors see beyond the “what” and the “how” of the organization, to it’s “why.” The organization shared its vision through the story this little book told and those who read it caught the vision, and the vision became a reality.

A book can be more than a book. Think about it.