“Do you understand what I am telling you, honey? You have breast cancer.”

The words just hung in the air, somewhere between her phone and mine: You have breast cancer.

The foundation of my story includes my trust in Jesus, He was the constant that made me strong and it was His grace that gave me ability do what I could not do on my own. He provided the inner strength I needed, it was grit. He’s responsible for the transformation in me, taking grit and making it beautiful. He’s waiting to do the same for you! You are dependent on Grace, defined by resilience, destined to be an inspiration and you are one tough cookie. You’ve got grit, you are a Grit Girl! 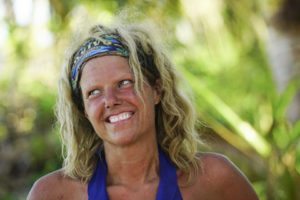 Sunday Burquest was born in Minneapolis, Minnesota. She was raised in a Christian, yet somewhat chaotic, home with four siblings. She married her husband Jeff in 1992, and they have four children: Carter, Brock, Tucker, and daughter Kennedy.

Her passion for ministry and speaking came after high school when she attended Bible college and returned home to work in her local church. She’s been a leader in several areas of ministry, starting as a receptionist and was quickly promoted to a pre-school teacher and volunteer coordinator.  In 2001, Sunday and Jeff accepted the position of youth pastors and were in this role for 12 years before launching a Young Adult ministry in 2012.

April 2012, her life changed forever when she was diagnosed with breast cancer. During the yearlong treatment process, Sunday clung tightly to her family, friends, and faith for emotional support. She remained strong through it all to finally achieve the title Breast Cancer Survivor! This gave her the boldness and courage to follow her lifelong dream to pursue another title—Sole Survivor. She competed in the 33rd season of the #1 ranked reality television series Survivor: Millennials VS Gen-X. Sunday will quickly tell you she brought the lingering emotional effects of cancer with her to the Island of FIJI. And through the experience on the reality TV Show, she was able to leave them behind. After Survivor, Sunday, along with her husband Jeff, made the decision that she would leave her position as a Young Adult Pastor and pursue her passion of traveling and speaking. Sunday draws on her personal experience while sharing a message of hope. She now devotes her time to sharing her inspirational message of how she became ‘Survivor Strong’.

Be the first to review “Grit Girl: Power to Survive Inspired by Grace” Cancel reply


Warning: count(): Parameter must be an array or an object that implements Countable in /home/dh_j4yptb/truepotentialmedia.com/wp-content/plugins/official-facebook-pixel/integration/FacebookWordpressWooCommerce.php on line 126

Notice: Trying to access array offset on value of type bool in /home/dh_j4yptb/truepotentialmedia.com/wp-content/plugins/official-facebook-pixel/integration/FacebookWordpressWooCommerce.php on line 126

Notice: Trying to get property 'name' of non-object in /home/dh_j4yptb/truepotentialmedia.com/wp-content/plugins/official-facebook-pixel/integration/FacebookWordpressWooCommerce.php on line 126