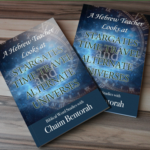 Share with a friend: Buy 2 or more and receive a 30% discount!

Discount is automatic at checkout

Hebrew scholar, Chaim Bentorah explores the original language of the Bible. He has traced words to their Semitic origins and searched out ancient Jewish literature to determine if the renderings in this book are within the range of plausibility. Then he stepped out of the box and drew from the science of modern physics and his Ph.D.  studies in biblical archaeology to reach the conclusions presented in this book.

He believes it is important to study the Word of God in its original languages and to be wholly dependent upon the Holy Spirit to guide students into their knowledge of God. The nature of the Hebrew language is open to a wide scope of interpretation and not all traditional interpretations should be trusted as exclusively accurate.

The ideas explored in this book are not presented as fact, but as possibility, well within the parameters of the original language and context. If you believe in God and Jesus Christ His Son who came to earth, lived, died, and rose again to atone for your sins and that you believe you will spend eternity with God in a place called heaven, then the possibilities of His reality are endless, and the original languages of His Word do not contradict the possibilities presented in this book.

You never know, Bigfoot may be a heavenly creature who steps in and out of a portal now and then to say “Hi there!”

“De omnibus est dubitandum” “Everything should be questioned.” Descartes